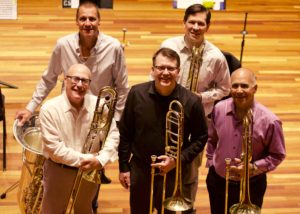 Featuring The Low Brass Section of the NY Philharmonic!

The Hudson Valley Performing Arts Foundation’s Chamber Music Series, kicks off our 2018/2019 season of world class music in the Mulder Chapel at the Warwick Conference Center!  This first in a series of three Chamber Music programs will feature the entire Low Brass Section of the New York Philharmonic!  Their Program of both Classical and Jazz inspired favorites along with a wonderful selection of Holiday Classics is sure to warm the heart and soul as we enter the Holiday season.  The Mulder Chapel at the Warwick Conference Center is the perfect intimate setting to experience this exquisite music performed by world renowned musicians. 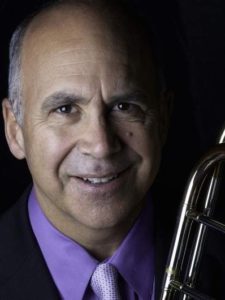 Joseph Alessi was appointed Principal Trombone of the New York Philharmonic, The Gurnee F. and Marjorie L. Hart Chair, in the spring of 1985. He began musical studies in his native California with his father, Joseph Alessi, Sr., as a high school student in San Rafael, California, and was a soloist with the San Francisco Symphony before continuing his musical training at the Curtis Institute of Music. Before joining the Philharmonic, Mr. Alessi was second trombone of The Philadelphia Orchestra for four seasons, and principal trombone of the Montreal Symphony Orchestra for one season. He has performed as guest principal trombonist with the London Symphony Orchestra in Carnegie Hall, led by Pierre Boulez.

Mr. Alessi is an active soloist, recitalist, and chamber musician. In April 1990 he made his New York Philharmonic solo debut, performing Creston’s Fantasy for Trombone, and in 1992 premiered Christopher Rouse’s Pulitzer Prize–winning Trombone Concerto with the Philharmonic, which commissioned the work for its 150th anniversary celebration. He performed the World Premiere of Melinda Wagner’s Trombone Concerto, conducted by Lorin Maazel in February 2007. In July 2013 he appeared with the Philharmonic as soloist in Bramwell Tovey’s The Lincoln Tunnel Cabaret for Trombone and Orchestra, written for Mr. Alessi, at Summertime Classics and at Bravo! Vail, both performances conducted by the composer. In June 2016 he gave the World Premiere of William Bolcom’s Trombone Concerto, a Philharmonic co-commission, conducted by then Music Director Alan Gilbert as part of the NY PHIL BIENNIAL; Mr. Alessi and the Philharmonic, led by Alan Gilbert, reprised the concerto in the 2016–17 season.

Mr. Alessi has been a guest soloist with the Lincoln, Colorado, Syracuse, Virginia, Alabama, Santa Barbara, Puerto Rico, Hartford, and South Dakota symphony orchestras; New Japan, Seoul, Hague, and Helsinki philharmonic orchestras; National Repertory Orchestra; Orchestra of Teatro Massimo Bellini in Catania, Sicily; Mannheim National Theater Orchestra; and National Symphony of Taiwan. Mr. Alessi has also participated in numerous festivals, including the Festivale Musica di Camera in Protogruaro, Italy; Cabrillo Music Festival; Swiss Brass Week; and Lieksa Brass Week in Finland. He was featured in the 1997 International Trombone Festival in Feldkirch, Austria, and the International Meeting of Brass Instruments in Lille, France. He is a founding member of the Summit Brass ensemble at the Rafael Mendez Brass Institute in Tempe, Arizona. In 2002 Mr. Alessi was awarded an International Trombone Association Award for his contributions to the world of trombone music and trombone playing.

Joseph Alessi is currently on the faculty of The Juilliard School; his students now occupy posts with many major symphony orchestras in the U.S. and internationally. As a clinician for the Edwards Instrument Co., he has also given master classes throughout the world and has toured Europe extensively as a master teacher and recitalist. He has performed as soloist with several leading concert bands, including the U.S. Military Academy Band at West Point, U.S. Army Band (“Pershing’s Own”), and the U.S. Marine Band (“The President’s Own”).

Mr. Alessi’s discography includes many releases on the Summit record label, including Trombonastics and Fandango, with retired Philharmonic Principal Trumpet Philip Smith. He also recorded New York Legends on the Cala label, Return to Sorrento on the Naxos record label, and conductor/composer Bramwell Tovey’s Urban Cabaret. His live recording with the Philharmonic of Christopher Rouse’s Pulitzer Prize–winning Trombone Concerto, commissioned for the Orchestra’s 150th anniversary project, can be heard on Volume II of An American Celebration, on New York Philharmonic Special Editions, the Orchestra’s own recording label.

Mr. Alessi was invited by the International Trombone Association to record a solo disc of newly composed works, which was distributed to the Association’s membership of 5,000 trombonists in early 1999 and is now available as Beyond the End of the Century through Summit Records. His recording of George Crumb’s Starchild on the Bridge record label, featuring Mr. Alessi as soloist, won a Grammy Award for 1999–2000. Other recordings featuring Mr. Alessi are with the Canadian Brass (Sony Classical and Philips Records). Further information about Mr. Alessi can be found on his website, www.slidearea.com. 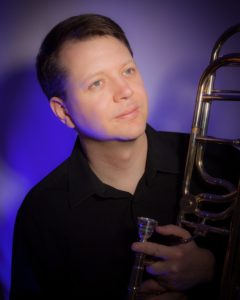 Mr. Williams made his solo debut with the Atlanta Symphony Orchestra in 2003 performing Paul Creston’s Fantasy for Trombone. He has been a guest soloist with the San Antonio Symphony, U.S. Army Band (Pershing’s Own), U.S. Military Academy Band, Georgia Brass Band, Atlanta Wind Ensemble, Juilliard Orchestra, and James Madison University Brass Band. He has also appeared as a soloist at the Eastern Trombone Workshop and the International Trombone Festival.

Mr. Williams’s first solo CD, Roadwork, is a collaboration with his former Atlanta Symphony Orchestra colleagues Bill Thomas and George Curran. Together with Bradley Palmer at Columbus State University, the four musicians founded the Southeast Trombone Symposium in 2010: through his continuing work with the Symposium Mr. Williams has helped to educate hundreds of young trombonists.

During his high school years Colin Williams studied with Douglass Wright. He continued his education at Manhattan School of Music and The Juilliard School, where his primary teachers included Philharmonic Principal Trombone Joseph Alessi and Philharmonic trombonist David Finlayson. He is an alumnus of the Music Academy of the West, now a partner in the New York Philharmonic Global Academy. 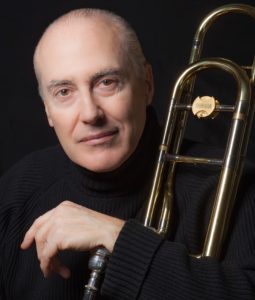 Born in Washington, D.C., into a military family, Mr. Finlayson spent his early years in the United States and Europe. His music studies began on the piano when he was six, while his family was living in Heidelberg, Germany; the trombone did not take center stage in his life until he was 13 years old.

In 1972 David Finlayson entered the University of Michigan School of Music for his undergraduate studies. His symphonic career began while he was a student in Michigan, with the Flint and Toledo symphony orchestras. In 1980 he was appointed assistant principal trombonist with the National Symphony Orchestra under music director Mstislav Rostropovich and performed at the Kennedy Center in Washington, D.C., for six seasons before joining the New York Philharmonic.

As a guest artist and clinician, Mr. Finlayson represents Yamaha and has conducted master classes in universities and conservatories in Spain, Brazil, South Korea, Finland, Chile, and Puerto Rico. In the United States his appearances have included the New England Conservatory, Boston Conservatory, The Juilliard School, Manhattan School of Music, Mannes School of Music at The New School, DePaul University, University of Hawaii, the Curtis Institute of Music, and University of Michigan. 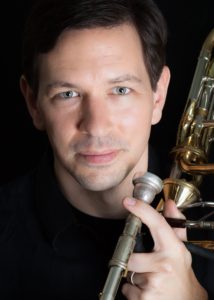 George Curran became the bass trombonist of the New York Philharmonic in June 2013 after serving in that role with the Orchestra during the 2012–13 season. Previously, he was a member of the Atlanta Symphony Orchestra for five years and a fellow with the New World Symphony. He has also performed with the major orchestras of Cincinnati, Detroit, Colorado, North Carolina, and Alabama.

In 2010 he performed with the Atlanta Trombone Project on a recording titled Roadwork. This project resulted in the formation of the Southeast Trombone Symposium, a week-long summer workshop at Columbus State University (CSU) where college students are coached by members of the Atlanta Symphony Orchestra trombone section. Mr. Curran was a soloist on a recently released recording titled A Beautiful Noise, which features prominent trombone soloists performing with the CSU Trombone Choir, including Philharmonic Principal Trombone Joseph Alessi. Mr. Curran has also performed concertos with the U.S. Army Band at the Eastern Trombone Workshop, Georgia Youth Symphony Orchestra, and many college ensembles.

A native of Farmington Hills, Michigan, George Curran received his bachelor’s degree in music education from Central Michigan University and a master’s degree in performance from the University of Cincinnati College-Conservatory of Music. His principal teachers have included John Rojak and Peter Norton. 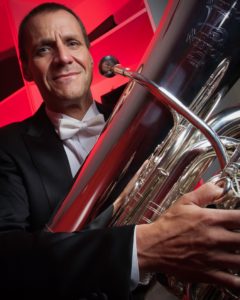 Mr. Baer began his undergraduate work at Indiana University of Pennsylvania, where he studied with Dr. Gary Bird. He completed his bachelor of music degree with Ronald Bishop at the Cleveland Institute of Music, and has done graduate work at the University of Southern California, Cleveland Institute of Music, and California State University, Long Beach, where he studied with Tommy Johnson. While in Long Beach, Mr. Baer taught at California State University, where he also directed the university tuba ensemble and the brass choir. In Milwaukee, Mr. Baer was adjunct professor of tuba and euphonium at the University of Wisconsin and director of the Tuba-Euphonium Ensemble.