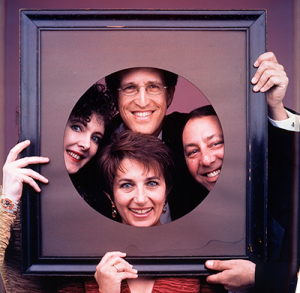 The Hudson Valley Performing Arts Foundation is thrilled to present Opus One as its Chamber Music Series finale program. This critically acclaimed tour du force ensemble is sure to inspire, delight and warm your soul!

Opus One brings together four of the leading musicians of our time, pianist Anne-Marie McDermott, violinist Ida Kavafian, violist Steven Tenenbom, and cellist Peter Wiley. Comprised of veterans as well as present members of the world’s most prestigious chamber groups, OPUS ONE is the result of a mutual love of music making between four extraordinary instrumentalists and friends who are each familiar figures in concert halls throughout the world, joining together to form one of the most exciting groups performing anywhere. The ensemble made its recital debut at the Library of Congress in 1998 and its orchestral debut with the Chattanooga Symphony shortly thereafter. It has since performed on major series, as well as at universities and festivals across the US. Dedicated to the music of our time, the group has commissioned and premiered several works written for it by such composers as Stephen Hartke, George Tsontakis, Marc Neikrug, Lowell Liebermann, Steven Stucky, and Roberto Sierra, and has been featured numerous times on St. Paul Sunday.