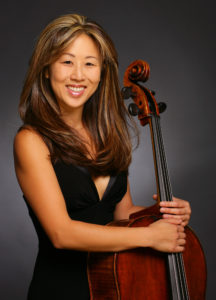 Eileen Moon joined the cello section of the New York Philharmonic in 1998, and in 2007 was named Associate Principal Cello, The Paul and Diane Guenther Chair. Born and raised in Los Altos, California, she studied piano and cello, eventually continuing her cello studies with Irene Sharp in the Pre-College Division of the San Francisco Conservatory. As a member of the Palo Alto Chamber Orchestra (PACO), Ms. Moon experienced years of immersion in the comprehensive arts community of the Bay Area and toured Europe and the West Coast, often as a featured soloist. She continued her studies at The Juilliard School, where she earned her bachelor of music degree, and then moved to Vienna to study with Valentin Erben of the Alban Berg Quartet. She was a top prize winner in numerous competitions, including YoungArts (Florida) in 1987, Irving Klein (California) in 1988, Geneva International Competition (Switzerland) in 1991, and Tchaikovsky International Competition (Moscow) in 1994. She has performed in prestigious festivals, and is the founder of the Warwick Music Series in Warwick, New York.