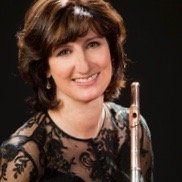 Mindy Kaufman, The Edward and Priscilla Pilcher Chair, joined the New York Philharmonic as flute and piccolo in 1979 at the age of 22, after performing for three seasons with the Rochester Philharmonic Orchestra. She received a bachelor of music degree from the Eastman School of Music, where she studied with Walfrid Kujala, Bonita Boyd, and James Galway.

Ms. Kaufman has appeared as a soloist with the New York Philharmonic under the direction of former Music Directors Zubin Mehta, Kurt Masur, and Lorin Maazel. For one season she substituted as principal flute with the Milwaukee Symphony Orchestra.

In September 2014, Ms. Kaufman was invited to teach in the inaugural two weeks of the Shanghai Orchestra Academy, created through a New York Philharmonic Global Academy partnership with the Shanghai Symphony Orchestra, in collaboration with the Shanghai Conservatory of Music. She previously taught at Columbia University. Mindy Kaufman has been a featured artist at the Japan Flute Convention and the National Flute Convention. A sought-after commercial musician, she has performed on more than 45 film sound tracks.