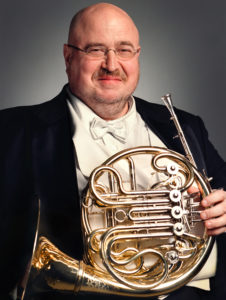 Philip Myers, The Ruth F. and Alan J. Broder Chair, joined the New York Philharmonic as Principal Horn in January 1980. He made his solo debut during his first month with the Orchestra in the premiere of William Schuman’s Three Colloquies for French Horn and Orchestra, and he has appeared as a Philharmonic soloist on numerous occasions. In October 2012 he performed Mozart’s Horn Concerto No. 3, conducted by Rafael Frühbeck de Burgos, and in November 2013 he performed Britten’s Serenade for Tenor, Horn, and Strings, led by Alan Gilbert. Other highlights include Schumann’s Konzertstück for Four Horns, with Lorin Maazel in February 2007 and Kurt Masur in May 2001; Britten’s Serenade for Tenor, Horn, and Strings led by André Previn in October 2001; and Mozart’s Sinfonia concertante in E-flat major for Oboe, Clarinet, Horn, and Bassoon in March 2010, led by Music Director Alan Gilbert.

Mr. Myers began his orchestral career in 1971 with a three-year term as principal horn of the Atlantic Symphony in Halifax, Nova Scotia. He was third horn with the Pittsburgh Symphony from 1974 until 1977. As principal horn of the Minnesota Orchestra for a season and a half, he made his solo debut with that ensemble in 1979, performing Richard Strauss’s Horn Concerto No. 1 with Sir Neville Marriner conducting. A native of Elkhart, Indiana, Philip Myers holds two degrees from Carnegie-Mellon University in Pittsburgh. He plays Engelbert Schmid French horns.