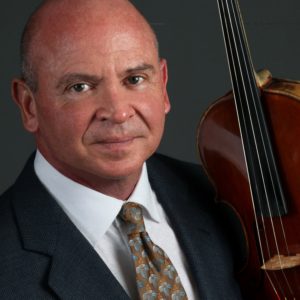 Violist Robert Rinehart, a member of the New York Philharmonic, is a familiar figure on the New York chamber music scene. A founding member of the Ridge String Quartet, Mr. Rinehart has performed in every major music center in the United States, as well as in Europe, Asia, South America, Canada, and Australia, and has collaborated with Benny Goodman, Rudolf Firkusny, and the Guarneri String Quartet, among many others. He has appeared at the Spoleto Festival, the Vancouver Chamber Music Festival, the Bridgehampton Festival, Chamber Music/West, Chamber Music Northwest, the Santa Fe Chamber Music Festival, at the 92nd Street Y in New York, and with the Chamber Music Society of Lincoln Center. His chamber music recordings include have received a Grammy Award, two Grammy nominations and the Diapason d’Or. Born in San Francisco, Mr. Rinehart received his first instruction on the violin in public school; soon afterwards he began taking private lessons, first with Frank Houser, then with Isidore Tinkleman, at the San Francisco Conservatory of Music. After his undergraduate work there, he completed his studies at the Curtis Institute of Music in Philadelphia. At Curtis his violin teachers were Jaime Laredo and Ivan Galamian, while Felix Galimir ;and Mischa Schneider were his instructors in chamber music. Mr Rinehart is a member of the faculty at the Manhattan School of Music, where he teaches viola, chamber music, and orchestral repertoire.