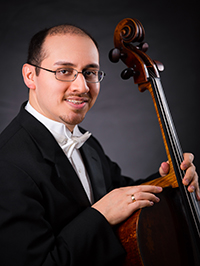 Alexei Yupanqui Gonzales was appointed to the cello section of the New York Philharmonic in November 2012. He has served as the principal cellist of the Rhode Island Philharmonic and the Boston Lyric Opera. He has also been a member of the Boston Ballet Orchestra and has performed with the Boston Symphony, Boston Pops, A Far Cry Chamber Orchestra, Emmanuel Music under the late Craig Smith, and the Bach Ensemble with harpsichordist John Gibbons.

An avid chamber musician, Mr. Gonzales has performed in various concert venues including Jordan Hall, Isabella Stewart Gardner Museum, Seattle Town Hall, Currier Museum of Art, and the Library of Congress in Washington, D.C. He won first prize in the Coleman International Chamber Competition with the Azure Trio, and he was a recipient of the Borromeo String Quartet Artist Award. He has also taught chamber music at the New England Conservatory Preparatory School.

Mr. Gonzales was a Tanglewood Music Center Fellow for three summers, where he received the Samuel Mayes Memorial Prize and participated in the Bach Institute Seminar. He has spent other summers at the Schleswig-Holstein Music Festival, Banff, the International Music Arts Institute, and the Killington Music Festival.

Mr. Gonzales studied with Laurence Lesser and Paul Katz at the New England Conservatory of Music. The son of Peruvian and German immigrants, Mr. Gonzales was raised in Andover, Massachusetts. Currently, he lives in Manhattan with his wife, Mie, an oboist. He is an avid Bayern Munich soccer fan.