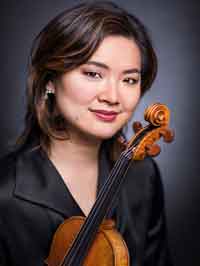 Violinist Qianqian Li joined the New York Philharmonic as Principal, Second Violin Group, in December 2017. An avid chamber musician, she has performed with Donald Weilerstein, Roger Tapping, Natasha Brofsky, Brett Dean, Gilbert Kalish, Curtis Macomber, and Anthony Marwood. Her honors include First Prize at Kazakhstan’s inaugural International Violin Competition, the Jules C. Reiner Violin Prize at the Tanglewood Music Center, the Ishikawa Music Academy Award, and prizes won with the Clara Piano Trio, of which she was a member for one year.

Ms. Li has performed at major music festivals including Aspen, Tanglewood, Yellow Barn, and Sarasota. As a soloist, she has performed with orchestras in major concert halls in Asia, the United States, the United Kingdom, and South Africa. Her performances have been broadcast live on the radio, including by WGBH Boston. Before joining the New York Philharmonic, she served as a member of the first violin section of The Metropolitan Opera Orchestra for three years, after winning positions with the orchestras of Seattle, Atlanta, and St. Paul in the same period. She has also performed in the Boston, Pittsburgh, and Atlanta symphony orchestras and The Saint Paul Chamber Orchestra.

Born in Nanjing, China, Qianqian Li received both her bachelor and master of music degrees from the New England Conservatory, where she studied with Donald Weilerstein and served as his teaching assistant, and was granted the Laurence Lesser Presidential Scholarship. Her other mentors include Malcolm Lowe and Lina Yu.