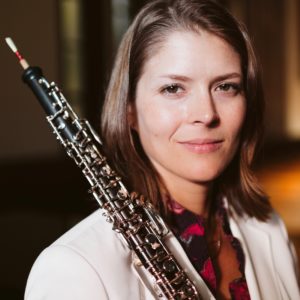 Oboist Anna Pennington has performed and given master classes across North and South America, Europe, and Asia. In addition to being an avid chamber musician, she has performed regularly with many orchestras, including the Jacksonville Symphony, Sarasota Orchestra, Florida Orchestra, Mobile Symphony, Pensacola Symphony, Albany Symphony, and the New York Philharmonic. Festival appearances include the New Texas Festival, the Aspen Music Festival, the Victoria Bach Festival, and the Salzburger Festspiele.

Anna is passionate about pushing boundaries and has been involved in numerous recording projects and radio broadcasts over the years, including signing with EMI Classics as solo oboist of the Planets, a classical-fusion ensemble based in London. She was also appointed Assistant Professor of Oboe at the University of Southern Mississippi School of Music, where she performed and toured with the resident quintet, Category 5. Currently, Anna is principal oboe and concertmaster of the West Point Band, where she has appeared as soloist on several occasions.

A Texas native, Anna’s degrees are from the University of Texas, the Manhattan School of Music, and the Florida State University. Her mentors have included Joseph Robinson, Eric Ohlsson, John Snow, and Beth Sanders. In her spare time, she explores French film, the intersection of experimental music and other art forms, and hiking in the Hudson Valley.