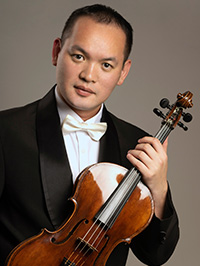 Hung-Wei Huang began music lessons at the age of seven, studying with Lin Chia-Zong, and won the Taiwan National Instrumental Competition in 1993. The following year he was accepted to the Curtis Institute of Music on the Louisa Knapp Curtis Fellowship, serving as principal viola of the Curtis Symphony Orchestra and studying with Michael Tree, Joseph de Pasquale, and Karen Tuttle. He then received the Walter W. Naumberg Scholarship to attend The Juilliard School, where he studied with Samuel Rhodes, and later attended the Mannes School of Music on a full scholarship, studying with Huang Hsin-Yun and receiving the most distinguished student award.

Mr. Huang served as adjunct professor of viola and chamber music at the Korea National University of Arts, and his students are members of professional orchestras across South Korea and around the world.