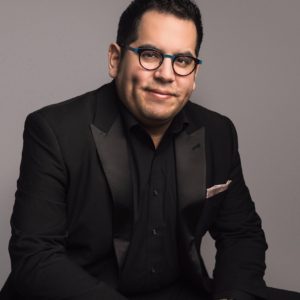 Praised as a musician of “compelling artistry and power” by the Seattle Times, the gifted American pianist Julio Elizalde is a multi-faceted artists who enjoys a versatile career as soloist, chamber musician, artistic administrator, educator, and curator. He has performed in many of the major music centers throughout the United States, Europe, Asia, and Latin America to popular and critical acclaim. Since 2014, he has served as the Artistic Director of the Olympic Music Festival near Seattle, Washington.

Mr. Elizalde has appeared with many of the leading artists of our time. He tours internationally with world-renowned violinists Sarah Chang and Ray Chen and has performed alongside conductors Itzhak Perlman, Teddy Abrams, and Anne Manson. He has collaborated with artists such as violinist Pamela Frank, composers Osvaldo Golijov and Stephen Hough, baritone William Sharp, and members of the Juilliard, Cleveland, Kronos, and Brentano string quartets.

Mr. Elizalde is a passionately active educator, having recently served as a Visiting Professor of piano at the University of Puget Sound in Tacoma, Washington. He has given masterclasses at the San Francisco Conservatory of Music, Emory University, Lawrence University, and the Music Institute of Chicago among others.

Originally from the San Francisco Bay Area, Mr. Elizalde received a bachelor of music degree with honors from the San Francisco Conservatory of Music, where he studied with Paul Hersh. He holds master’s and Doctor of Musical Arts degrees from the Juilliard School in New York City, where he studied with Jerome Lowenthal, Joseph Kalichstein, and Robert McDonald.